After watching just the first 5 minutes of Kim’s Fairytale Wedding, I immediately knew I had to blog about it. I was already starting to text my girl friends on how ridiculous it was, and figured it’d be a lot easier if I just jotted down everything that annoyed me… which was a lot. To be honest I haven’t even found the time to sit down and watch part 2 of the whole ordeal, for those of you who haven’t seen part 1, well you didn’t miss much – and you can get the main points if you just read below…

It actually ended up being somewhat entertaining thanks to Khole’s smart ass (minus the fact EVERYTHING is ENTIRELY SCRIPTED!!)

Three minutes in and Kim is already complaining about Kris’ dogs, how she’s going to live with them. She can’t tolerate them in her bed. “Dog boogers are disgusting and unsanitary and these are just issues I can’t deal with. I have allergies now. Those things have to go in crates. I’m going to a hotel.” Seriously? enough is enough… 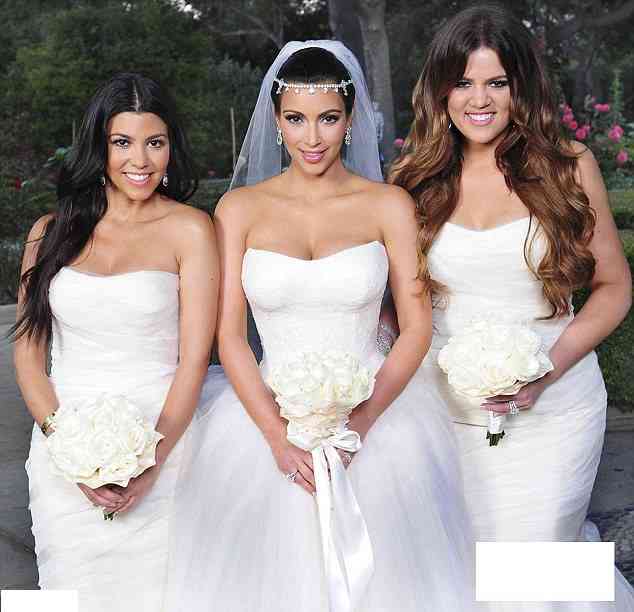 To start off… I’m not kidding when I say ¼ of the show was about Kris and her surgery she got done on her face, which happened to be a little too graphic anyways.

Great comment from Mr. Humphries when he told Khloe “your mom looks like an alien from MIB.” He continues to go on with saying “Khole’s just an inappropriate attention seeker” –  “She’s just so creepy to be around.” – how nice to say to your future sister in-law.

Laughed out loud when Scott mocked Kris H on his slowww dumb voice.…. “Sorrrry guysss I got losttt. Againnn….” – funny how I noticed this the first time this guy was introduced on the show.

How is it that after 5 weeks Kris finally makes her ‘entrance’… and shows off her new look after surgery… what, has she been in hiding out since then?

Is it me or is it odd that Kim’s entire family questions Mr. Humphrie’s intentions and they’re all seriously worried about a prenup?

5 Guys and Burgers… and a little truck… or stand? Haha I actually loved Humphrie’s reference to a State Fair for their wedding.

Booking the wedding location behind Humphrie’s back. Seriously? Who does that?

Why would you give people donuts at the wedding? In the shape of a heart… classy Kim… real classy haha

So that leaves 1/4 of the show left over (between Kris’ surgery, LA scenery and Rob’s addiction) – of that I’d still say there was only a total of 10 minutes that covered the actual wedding planning. Sweet. Still have yet to watch part 2… is it even worth my time to watch it?

Check out another post I actually took the time to write – ranting about more details from the wedding “America’s Royal Wedding…” seriously?

As you all know, today is the day Kim Kardashian weds her boyfriend of *6* months, Kris Humphries – and if you didn’t know that… well I don’t know how you wouldn’t considering its been the headline of news sources, tabloids, magazines and trending on twitter for the past month. I try to refrain from being too opinionated in any of my blog posts, but I’m letting my opinion slip on this one. Apparently Good Morning America referred to Kim and Kris’ wedding as “America’s Royal Wedding,” which literally makes me sick to hear that. She’s a quote on quote ‘entrepreneur’ who became famous after a sex tape was released… sometimes I wonder who she’d be today if that hadn’t gotten released. Who would of thought the accidental release of a sex tape would lead to something so great? And don’t get me wrong here, I will admit I’m one of the 3 million viewers that tunes in every Sunday to watch Keeping Up With The Kardashians to feed the fuel to the fire – but that’s only because I think Khloe and Bruce are hilarious.

I think this whole wedding has been blown out of proportion, as much as I’d like to say I don’t care – I do. And it’s with the help of the media that I unfortunately find myself sickly interested in what its all about – they’ve been throwing details at us for the past month about it… details such as these:

Either way, I don’t think this wedding deserves to be called America’s Royal Wedding, it’s just another Hollywood wedding that any normal person would dream of having. If Kim is anything like Khloe then hopefully the marriage will last, but if she stays true to her  past relationship habits it won’t (and she’ll be back with Reggie in a few years, as soon as she realizes how beautiful he still is) 😉

And yes, all this media and press about Kim’s wedding just led me to waste an hour writing a blog post about something I supposedly could care less about… Like I said before the wedding and Kim have been trending for weeks now on Twitter. Here are a few I came across:

According to Perez, Kim is making millions off this wedding, $17.9 million to be specific! This is absurd.

* $15 million plus profit for four-hour, two-part wedding special on E!

* $300,000 for exclusive engagement announcement with People